The JNJ dividend has made Johnson and Johnson the bluest of blue chip companies.  It is one of only two AAA rated companies in the USA (the other being Microsoft). It is more than a dividend aristocrat - it's a "dividend king" meaning it has raised its dividend for more than 50 consecutive years. It has a very strong balance sheet and it has been very good to shareholders over long periods of time.

We start our case study assuming that you purchased $10,000 worth of stock on the first trading day of January 1982. Choosing 1982 is no accident as this was the year that JNJ hit a large crisis. We have ended in 2016 by showing that even though 1982 was a turbulent year for Johnson and Johnson shareholders, a terrific company like this is likely to do wonders for your wealth if you remain patient.

JNJ dividend and capital growth in this 35-year period have been terrific and this case study highlights that.

In September of that year, JNJ hit some huge problems when in the space of just a few days, seven people died having taken Tylenol - the JNJ branded painkiller. At the time, the drug was JNJ's best selling product but these deaths were caused by traces of cyanide in the capsules. You sit back and read about this in the papers with horror. This is a large holding of yours and their best selling product is literally killing people. Should you sell?

You think long and hard but, due to the underlying strength of the business, its solid balance sheet, and its swift recall and overall reaction to the crisis (read more here: www.nytimes.com/2002/03/23/your-money/tylenol-made-a-hero-of-johnson-johnson-the-recall-that-started.html), you decide to sit tight and let the quality of the business do its work for you. This wasn't necessarily easy to do given the panic selling that initially hit the stock.

But wait a minute - we haven't even considered the juicy JNJ dividend payments you'd have received along the way!

Between 1982 and 2016, JNJ has paid a total of $34.404 in (split adjusted) dividends. That means that in total you have received $145,322 in JNJ dividends through the years. Not bad considering an initial $10,000 investment. Remember that the early dividend dollars would have been worth more as well due to the dollar having more purchasing power (i.e. before inflation). 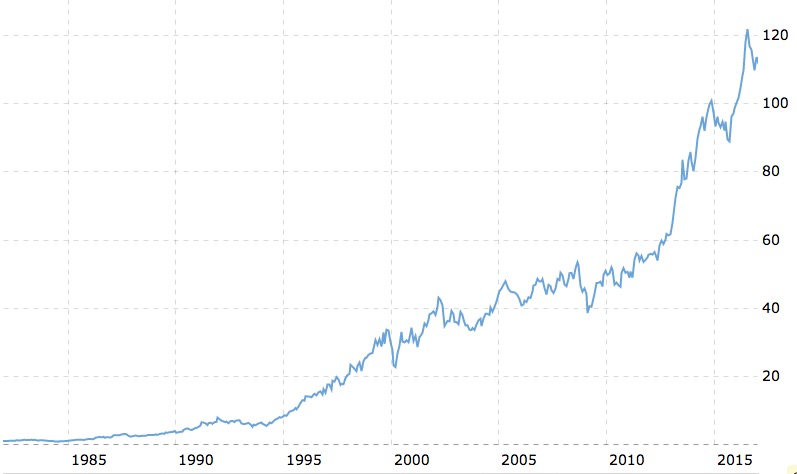 Where it gets really crazy - JNJ dividend reinvestment

As we've pointed out elsewhere on the site. The way to turbo charge your wealth building is to consistently reinvest your dividends. This allows you to harness the power of compound interest.

If you had reinvested your dividends back into JNJ shares (perhaps you had signed up to their DRIP) then your annualized return would have improved from 11.8% per year to 14.38% per year.

Doesn't sound like a huge improvement does it? But small differences in your compound rate make a huge difference over time.

With 9,631 shares you would have earned $30,819 in dividends in 2016 alone. This means that you'd be taking over 3x your original stake in cash payments every year. All you did was be smart enough to make the original purchase, sign up to the DRIP and then just leave the shares for some 34 years. We would expect the dividend to continue growing for many years to come. In fact, in April 2017, JNJ announced another 5% increase to that precious dividend.

It is not impossible you could have been in your late 20s in 1982 and saved up an initial $10,000 to put into JNJ stock. You left it alone for 34 years, reinvested the JNJ dividend and that one decision has meant you are almost completely set up for retirement. You would now have an asset worth over $1.1mm that's generating over $30,000 a year in dividends - even if you had never saved another penny. You can see why Charlie Munger says it only takes a handful of really good ideas to be life changing.

The lesson for stock investing is the same. Find some high quality, cash generative companies, that have durable competitive advantages which allow them to consistently earn high returns on capital.

If those companies have strong balance sheets, then you have a lot going for you and you should really look to try and get your hands on a diverse pool of assets like that when their prices are reasonable.

Of course that won't completely guarantee success but you would be putting the odds heavily in your favor and that is all you can really control.