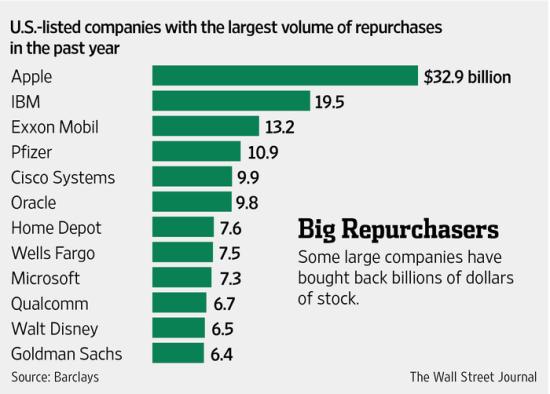 Share buybacks are one of two ways that management can return cash to shareholders. This website, of course, is dedicated to dividends but dividend investors also need to understand the value of buybacks as well. What are they and what are their advantages and disadvantages?

A Share buyback (or share repurchase) is where a company purchases its own shares in the market or by a tender offer or other negotiations. The effect of the buyback is to reduce the number of shares in circulation. All other things being equal, these share repurchases will increase the earnings per share (EPS) which would result in a higher share price if the price/earnings multiple stays at the same level.

What does a share buyback mean for you as a shareholder?

In short, a buyback increases your ownership stake in the business.

Let's imagine, for example, that you own 10 shares in a local restaurant. There are a 100 shares outstanding, so you own 10% of the business. Let's say that a couple of the larger shareholders want to sell out.

All the shareholders get together and decide that you will use the cash that the business has generated to buy out these two shareholders and a price is agreed.

The two shareholders have 50 shares and these are bought back by the company and their shares are cancelled.

Your position has been strengthened now as you still own 10 shares in the business but there are only 50 shares outstanding. Therefore you own 20% of the company and are now entitled to 20% of the earnings and dividends.

What do they mean for the company?

Like a dividend, a buyback means that cash is being spent by the company so the asset base is reduced. On the other side of the balance sheet, the share buyback will reduce the shareholders' equity by the same amount. This can help to increase the return on equity of the company.

The effect on the income statement is that the net profit or earnings are now divided up among fewer shares. This means that the same amount of profit divided by fewer shares will result in increased earnings PER SHARE.

How does a buy back affect your dividend?

As your dividend is declared on a per share basis then it doesn't mean anything - at least initially.

Over time, however, a share repurchase program should work to your advantage. For example, imagine a company is paying $1 per share in dividends every year and the dividend costs the company $200 million. If this company managed to buyback half their shares then if they were still happy to pay $200 million out in dividends then your dividend will double and you'll earn $2 per share.

The major advantages of buybacks are mentioned above such as increased EPS and a potentially improved return on equity.

A buyback is also effectively the same thing as a company reinvesting dividends for you but in a more tax efficient way than you simply buying more shares with your dividend as you don't have to pay tax on the dividends. Share repurchases are also a good way for management to allocate capital if the share price is undervalued.

There are several disadvantages to share repurchases. There is a significant risk that management decides to repurchase shares when the share price is overvalued. This is essentially the same mistake as overpaying for an acquisition and can lead to value destruction in the long run.

The shareholder also has to be aware that share buybacks can be quite deceptive. This is because EPS could be increasing at a faster rate than underlying earnings which may cover up poor performance within the business.

It is up to you as a shareholder to keep an eye on how management are using the shares of your company.

Ultimately shares are a form of currency. In an ideal world, a company with great capital allocation skills will look to buyback shares when they are undervalued and perhaps issue them when they are expensive or overvalued in order to purchase cheaper assets.

One of the best capital allocators of all time was Henry Singleton who ran a company called Teledyne. He used the stock market boom of the 1960s to make a number of acquisitions using Teledyne stock. When Teledyne stock slumped (along with most of the market) in the early 1970s, Singleton started aggressively buying back Teledyne stock which helped to bring substantial value to his shareholders.

Have a read of this excellent Forbes article from 1979 on Henry Singleton. It will give you quite a lesson on capital allocation!